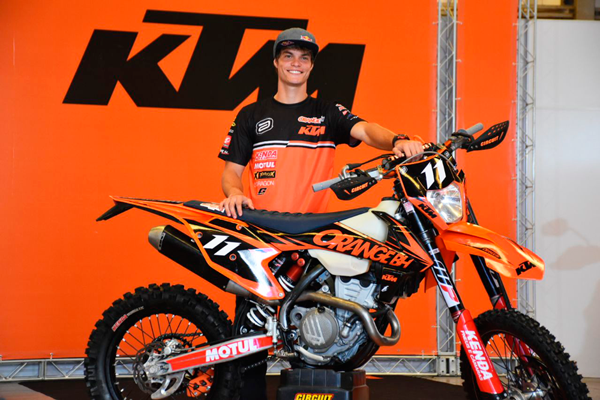 For few season now, we have seen a Brazilian rider come into EnduroGP before the opening round of Brazil’s National Championship. First we saw Romulo BOTTREL (Honda) in 2014 and 2015, and in 2016 - in Gordexola (Euskadi) - we welcomed one of the greatest hopes of South American Enduro: Bruno CRIVILIN (KTM). The young Brazilian is back again in the World Championship for the Portugal – Spain tour!

Very well known in his country for having stood up to the best Junior riders at the SuperEnduro of Belo Horizonte (2016), and for achieving a very strong result during Red Bull Minas 2016 ahead of legendary extreme riders such as Graham JARVIS (Husqvarna).
Despite a knee injury suffered the week before Gordexola, the South American had secured an impressive 11th place on the first day, but he took the wise decision not to start on Day 2 of one of the most difficult Grand Prix of the season with his painful knee.
He was, however, encouraged by this Day 1 result, and CRIVILIN decided to return for 2017 GP of Spain but couldn’t make it at the end. At 21 years old, the friendly Brazilian will once again challenge against the top riders in the Junior category and aim for the Top 10!
CRIVILIN will be bring another fellow during these two Grand Prix, as Patrik CAPILA (Yamaha), coming also from Belo Horizonte, will race in Junior 1!

In view of the talent we saw him display last season in the Spanish Basque Country, Bruno CRIVILIN could be a serious outside contender in the under 23 category. In any case, it is a real pleasure to see Brazil represented again on the International scene...